This Accordion Pumpkin Card is a complex card to make but I will walk you through making it step by step.  It is a fun and scary card but well worth it in the end.

This is the October Patreon Card for The Crazy Cricut Lady.  The tutorial is free but to download the design you will need to become a patreon supporter of The Crazy Cricut Lady site.  This is completely separate from my site membership and does cost $1 per month.  That helps me keep the rest of this site free and allows me to help pay for the site.  Only one project per month is posted on my patreon site but you get access to all past projects when you join and help support this site.  Consider joining my patreon supporters.

What You Will Need:

I went with traditional Halloween colors for the Accordion Pumpkin Card and embellishments.  The base card doesn’t needs to be two sided because you don’t see both sides, but I would stick with a darker color to hide the tabs.  Patterns would work well with some of the bigger parts but not the thinner ones. Just don’t use too many patterns.  This would get confusing.

The intricate cuts require a little heavier paper to be crisp.  So choose at least 100 lb weight paper the embellishments if you can.

I cut several extra copies of the yellow candy borders because they are difficult to get up without tearing them.   In fact there are lots of pieces with very intricate cuts.  Be careful taking them off the mat.

First re-crease the fold lines and don’t forget the small score lines on the center pumpkins.  Make sure to line up the accordion pieces with the tabs on the right and right side up before you start.

Glue all the embellishments together before you assemble the accordion pieces. You can use tape glue to hold them temporarily if you want but liquid glue is a must for a permanent hold.

Glue the tabs on the black base cards behind the card to its left.  Because they are black they hide well. Use liquid glue for this. Let them dry flat overnight. All five sections should form one long piece now.  With scissors cut the last tab of the fifth section if you want.

Now it the time to glue the embellishments to the card pieces.  Follow the pictures to see how they go.  Leave the right edge of the lowest pumpkin level free to tuck tabs in later.

After the glue is dry fold the pieces like an accordion and stand them up. Glue the tabs on the center pumpkins under the pumpkins to the left alternating between in front and behind the main card. Let them dry. Fold the card with the joints in front going forward and the joints in back going back.  After the glue dries, open and close the card a few times to make sure it works properly.

Now we will assemble the card band.  Glue the medallion together following the pictures.  Then lay the card flat on top of the long thin black rectangle in the middle.  Wrap the band around the card loosely so that it has room to slide off.  Glue the band in the front middle of the card.  Finally attach the medallion to cover the joint.  Don’t use too much glue or the card will stick to the band.

And your Accordion Pumpkin Card is done!  Enjoy.

If you enjoy this type of card, you may want to try my Valentines Accordion Card too. 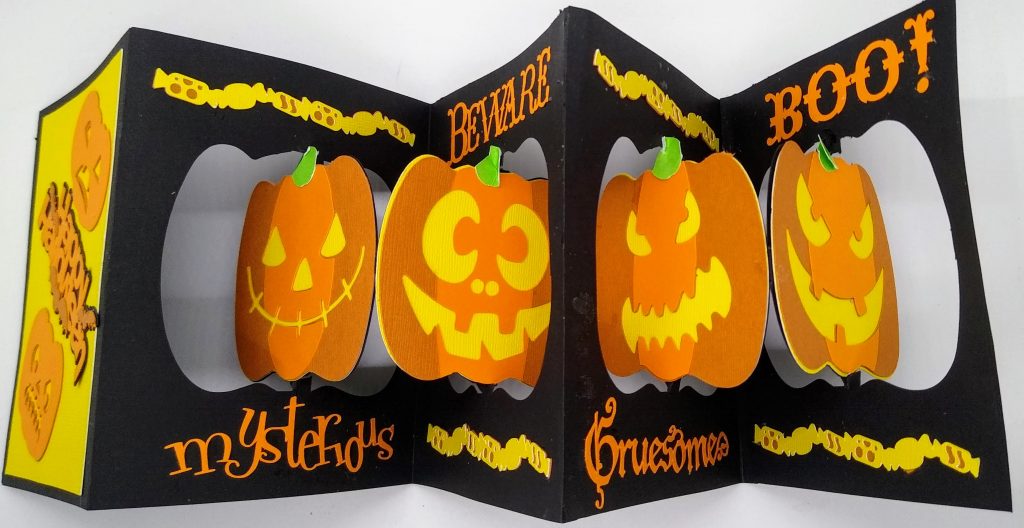