Back To School Bendy Card For Teacher or Student

Make this Back to School bendy card for a student or their favorite teacher. You can send them back with style and some encouragement. Make it in school colors for that extra special touch.

See my nondenominational holiday bendy card here.  This card really doesn’t fit in an envelope. It is just too bulky assembled, so you will have to give it in person.  But that is ok for your favorite student or teacher too.

Paper Selection for the Back to School Bendy Card

I did this card in orange and black because those are my nephew’s school colors.  Use the colors of your student’s or favorite teacher’s school, or use any colors you like.  You don’t see a lot of the base card so patterns would look weird.  But the overlays or the embellishments could be made from patterned paper as long as pen shows up.  They could be any weight paper as long as the tools stand up.

Cutting the Back to School Bendy Card

Cut the card base and the cricut will do the writing.  I used a a black pen.  The font in this card is an Access font called DTC Summer Solatice.  You can use any pen in your cricut with this simple trick.  See it here.

The embellishments are thin so be careful removing them from the mat.

All the images in this project are Cricut Access images.  Most of my projects include Cricut Access images because I know that everyone using Design Space can get those images.  And if you are an Access member, you can use them for free.  There are other benefits for having Access, like Access member only sales, a 10% discount at Cricut and free shipping.  See them here.  Or you can just click this link to sign up for Access.

After December, Cricut will start limiting the number of uploads and possibly the number of categories you can have if you don’t have Access.  And if this works to increase the subscription rate, I bet more things will be “Access Members Only.”  Think about signing up now because it IS really worth $10 per month and it will probably go up after December for new subscribers.

Assembling the Back to School Bendy Card

As always, start by re creasing all the score lines.  There are two on each of the two smaller black base card pieces.  Then assemble the embellishments.  The lines on the book are drawn by hand.  The pencil can be confusing.  First glue the white piece on with the curve facing the tip. leaving a little space so that it looks like the pencil lead.  Then attach the orange piece, right up against the white piece.  I suggest laying them out first before gluing so that you get the spacing right.

Glue the tools either behind the black piece or between the orange and black piece of the smallest overlay.  Actually I meant to put them between the two pieces but glued the orange piece on too early, but discovered it worked well either way.  Attach the school to the big overlay and the book to the middle sized overlay.  Make sure you don’t cover the slits on these pieces.  Then glue the orange overlays to the corresponding black base card pieces, but be sure to line up the slits in the bigger two pieces.

Next. fold the big tabs over and with liquid glue attach them to the back of the bigger piece behind them.  Be sure to let them dry before going to the next step.

And you’re Back to School Bendy Card is done.  Enjoy! 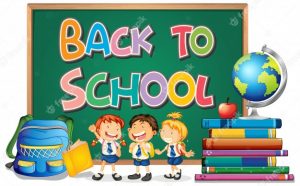 Back to School Fun Facts