This Moon Luminary is fantastic!  I have recently designed a bunch of luminaries.  The links to all of them are at the end.  This one is the hardest to assemble but by far the most amazing!

This is the September 2021 Patreon Card for The Crazy Cricut Lady.  The tutorial is free but to download the design you will need to first become a patreon supporter of The Crazy Cricut Lady site.  This is completely separate from my site membership and does cost $1 per month.  That helps me keep the rest of this site free and allows me to help pay for the site.  One project per month is posted on my patreon site but you get access to all past projects when you join and help support this site.  Consider joining my patreon supporters now.

What you will need

Paper Selection for the Moon Luminary

I stuck to the standard Halloween color of black but white would also work.  Patterned paper looks nice but when it is dark and you light it up you can’t really see the pattern.  The vellum needs to be light.  I tried black vellum and it didn’t glow well.

The non-moon parts are labeled with letters below them.  Do not cut out the labels.  The labels are there to help with the assembly which is the hard part.  It is not possible to easily make this project bigger because it won’t fit on one mat if you make it any bigger.
The scrollwork on the moons has centers for the loops.  Make sure you save these pieces.  They can be left off to make more vellum shine but it looks much better with them than without.  The first picture above has the pieces included the second doesn’t.

The moon has many little cuts and the parts are thin in places and can be hard to take off the mat so be careful.  Vellum can be challenging to cut.  Make sure it is sealed properly to the mat.  Take a scraper and smooth the vellum down flat.  Any air pockets will cause the vellum to tear.

This project is somewhat difficult to make but I will walk you through it.  You will need to have the Design Space file or the SVG file open to refer to the parts labels as you make the moon.  Alternately you can label the parts with a pencil on the inside of the piece.

First, you want to attach the vellum to the back of the moons.    Make sure you attach it to opposite sides of the moons.  They are mirror images of each other so make sure the vellum will be on the inside when they are put back to back.  See picture 1 below.  Then put the glue on the back of the paper so that it doesn’t show through.  On the first picture those glue lines will be hidden inside the moon.  Make sure that the vellum covers all the gaps in the paper so that it shines properly.  If you saved the centers of the loops glue them to the front side of the moons now where they go in the design after attaching the vellum.  And you need to make sure the glue is dry before you continue to assemble the moon.

Putting On the Sides of the Moon Luminary

After the glue is dry on the vellum, re-crease all the fold lines in the other pieces.  Before you start gluing, look at the direction of the points and the tabs and which set of tabs to put glue on first.   Planning ahead will prevent headaches later, taker my word for it.  First, lay down one of the moons with the vellum facing up and the small cut out on top.  Then start by attaching piece A to the bottom outside edge of the moon by folding in the tabs and putting glue on them.  The thin pointy part goes on the point of the moon.  Curve the piece to make it fit to the moon.  Then attach part E to the inside bottom edge of the moon the same way.  See the second picture below.

Attaching the Rest of the Sides

Next attach part C to the top outside edge of the moon and part D to the inside top edge.  Part D may overlap part E on the inside.  You can cut off the extra with scissors or just overlap them.  See picture 3 above.  The holes in part C are for inserting the light and holding the cover (part F).  Part B fits into the open space on the outside.  Again it may overlap.  Cut off the extra or tuck it in.

Now fold down (they should be re-creased already) the tabs on the top and put glue on the tabs.  Next carefully place the other moon shape, vellum down over the top of the tabs.  It will take a little manipulation to get them to stick and is the hardest part of the construction.  The big hole in part C can help.  Insert a pokey tool or pen in the hole to secure some of the tabs to the top moon.  See picture 4 above.  This is also where Art Glitter glue is most helpful since it gives you a little time to play until it sets.

Finishing Up the Moon Luminary

If you want to hang the moon, with a needle threaded with some string, go through the vellum in the top hole of the both moons.  String lights with a battery work better with this luminary than the votive battery lights.  Both work though.  But which ever type you use put them through the hole in part C and then put part F over the hole.  This is done by folding the top and bottom tabs in and inserting them through the long thin holes in part C.  See picture 5 above.

And your Moon Luminary is done!  That was difficult, I know but it is well worth it because lit up, your moon looks amazing! 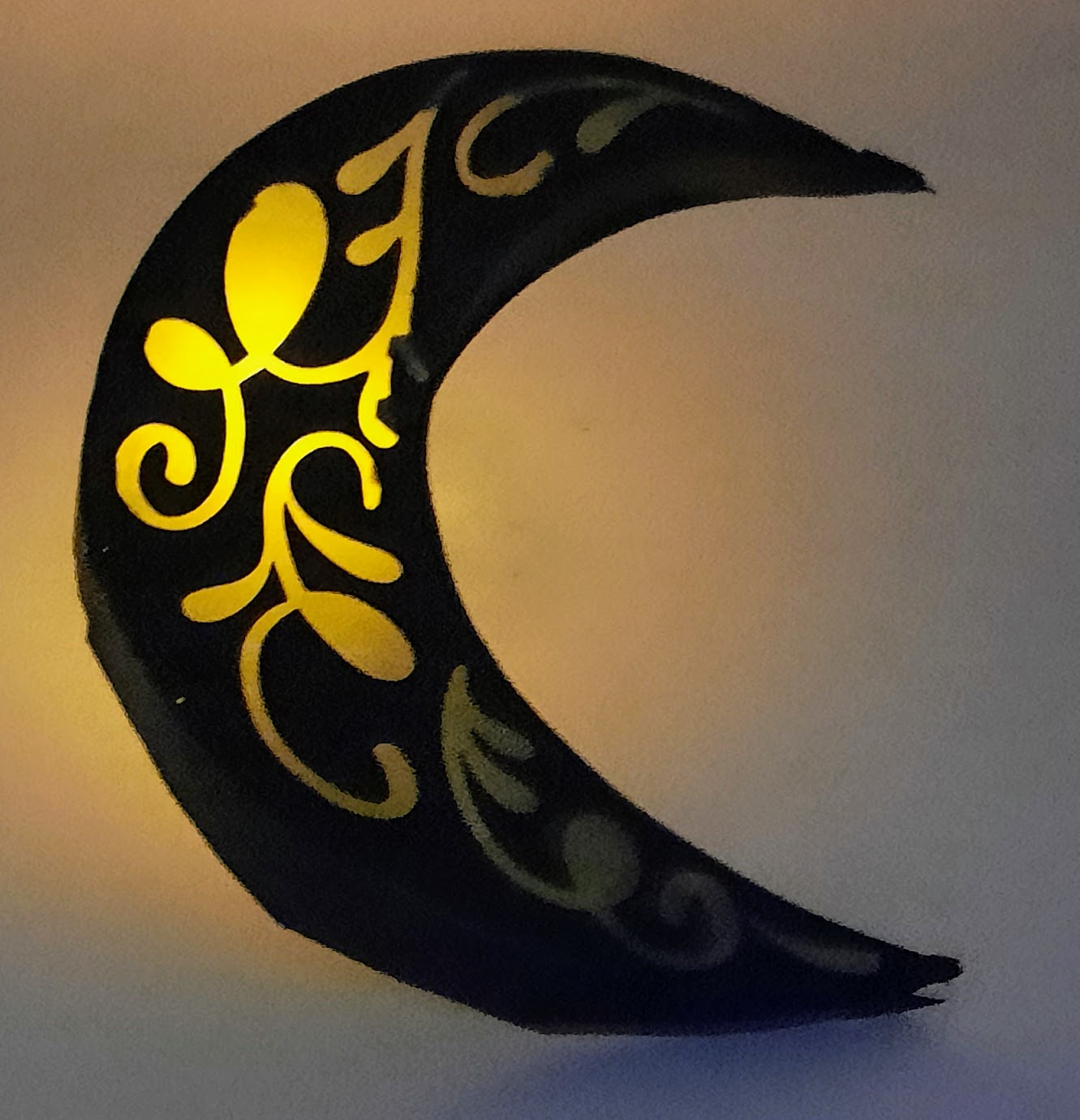