Let your scary flags fly with the Halloween Flag Card.  The cover even has a delicious Halloween cake!  Each flag has a multi-layer image making it fun! to make and glue together.  And the accordion interior adds dimension.

The cake on the cover looks good enough to eat!  This card fits into an A7 envelope for mailing or you could make your own coordinating envelope with my custom envelope tutorial here.

I found this wonderful spider patterned paper for the base of this card!  The base card should be heavier paper (110 lb. wt.) but this patterned paper is lighter and that is OK because I use two layers on the front.  None of the papers need to be two sided because you don’t see both sides. I stuck to traditional Halloween colors for the rest of this card.

The writing on this card is cut out so no pen is needed.  There are a lot of pieces though.  Some are thinner than others so be careful when removing them from the mat.  And be careful to keep track of all the little pieces.  It is so easy to lose a couple of the letters.

I saved paper by moving the parts around the mat.  If you need help with how to do this see my video.

Start by re-creasing all the score lines.  The orange piece is folded like an accordion.  Glue it on the inside of the base card, leaving a little room on each edge.  Only glue the ends to the base card.  Leave every thing between the first score line on each end unglued.  See the top view of the card above.

Next glue together the front of the card.  If you used a two sided paper for the base card you won’t need the overlay.  The cake assembly is pretty straight forward but none of the pieces are glued to each other.  It must be glued to the front or the overlay directly.  Plan the spacing by laying it out before gluing.  Space the letters on the layers of the cake before you glue them or they can easily get off center.

The flags and the bride of Frankenstein all have multiple layers.  Most of them are easy to figure out, but there are two exceptions, the bride and the pumpkin.  The bride is assembled in the following order from the bottom up: white layer, then the purple layer.  Next place the black layer so that the front of the face lines up, then put the green layer over that.  Lastly glue the hands on.  The pumpkin is assembled black layer first, then the green layer.  Next is the red layer and finally the orange layer.

Glue the flags, once assembled, to the left side of the even numbered score lines so that the back is glued partially to the accordion.  Glue the bride to the left side and the skulls to the right side as in the picture above.  Open and close the card a few times to make sure it works properly.

And your Halloween Flag Card is done!  It fits into an A7 envelope for mailing. 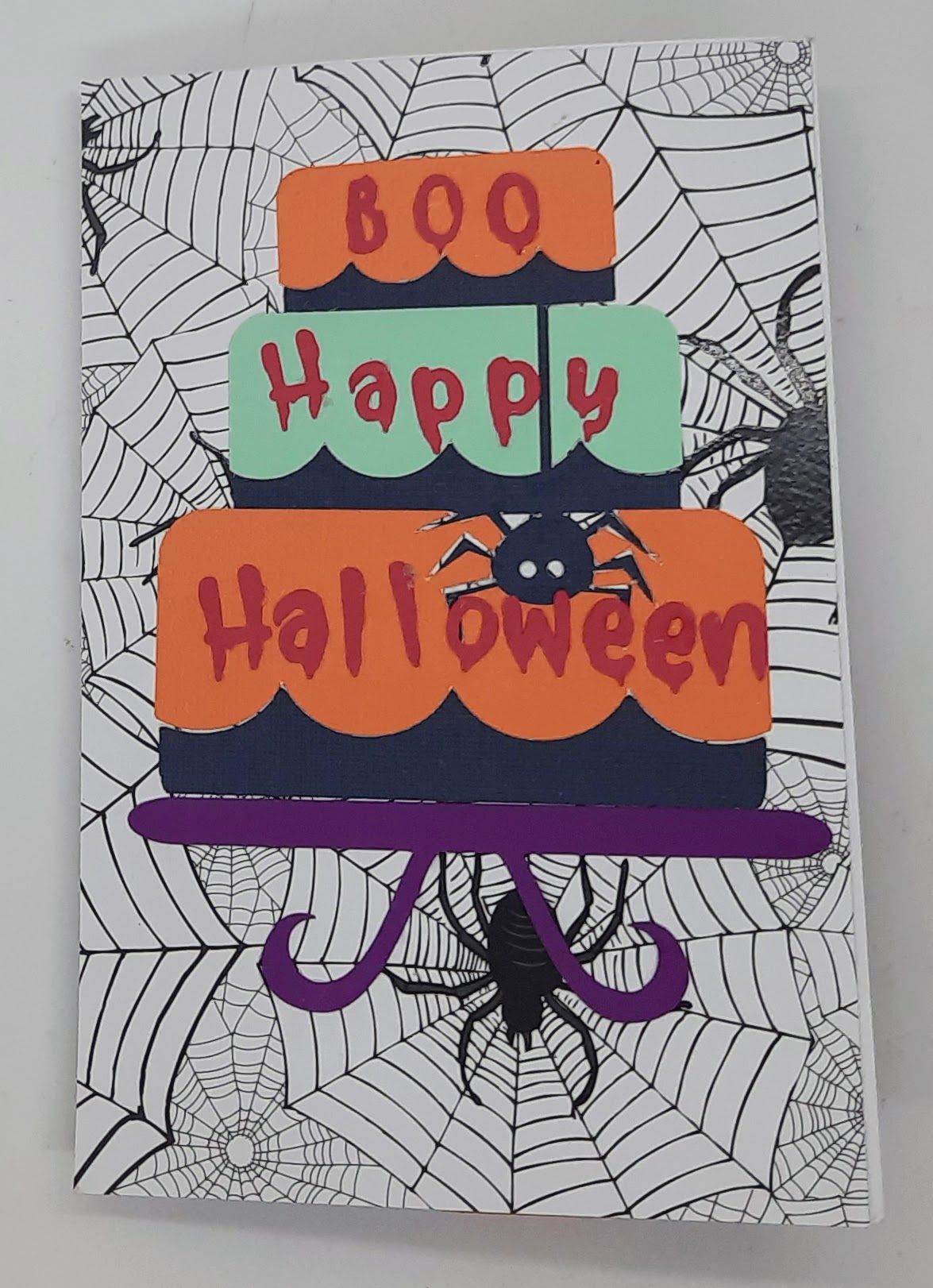