When I asked what you wanted to see, you all answered paper flowers.  So I spent all day yesterday making rolled flowers. In the next week I will do other types of flowers, but since I was already thinking about doing these I decided I would try different paper weights and different tools and let you know what worked best for me.

I bought some pre-cut quilling strips at Hobby Lobby which worked great.  Warning though, if you take them out of the package they never lie flat or fit in the package again.  Not a problem for them working, but take up a large shoe box of space.  It takes several of the strips to make each flower but you get about 75 strips in each pack.  I had others but Cordelia stole them as soon as they were made.  You can get the packs of pre-cut strips at Amazon too.

The paper has to be at least 65 weight.  I tried lighter paper and they just didn’t look right and tore easily.

Glitter paper worked well but patterned paper looked funny.  The pattern needs to be small if ths is what you try.  Both glitter and patterned paper were only one sided, but that works. It adds some color, but I suggest rolling the flowers so that the color is on the inside.

The paper can be solid core but it doesn’t have to be and I sorta liked the white edge to the flowers.

In the end the paper choice in up to you.

The cutting is straight forward.  Just be careful when taking them off the mat.  They are spirals so you need to be careful not to rip them.

All of the flowers have a circle in the center of the spiral.  The circle helps when gluing them together.

I tried both a quilling tool that I bought at Hobby Lobby and two different types of tweezers to roll my flowers.

The quilling tool worked the best but the thick paper doesn’t go in the slit easily.  I pulled the prongs apart gently a little to make this easier.
I suggest, if you are going to use tweezers that you use the kind that open when you squeeze them like these: 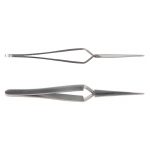 The regular tweezers kept letting go of the paper.

Start with the outside end and work towards the circle in the middle.  Roll the flowers once and let them unravel and then sit for a little while.  I think this just lets the paper relax and get used to being rolled.

After they have set, re-roll them again and let them unravel just until they are the size you want.  This is harder than it sounds but with a few tries you will get it.  You can always re-roll them if they expand to far.

Next bend the little circle under the flower and glue the whole flower to this base.  I tried several different methods to glue the flowers.  The easiest and quickest hold was a glue gun, but this created little strings, like always.  Liquid glue works too but you have to hold the flower the way you want it until the glue dries.  Tape glue failed miserably.  I tried super glue and it worked but I hate working with super glue because I always stick something I don’t want, like my fingers.

After that I glued the flowers to the leaves.  It gave them a little more stability, but you can use them without the leaves.

Rolled flowers are simple but take practice.  Try them a few times before you give up.  They are worth the effort.

I have made a page with all the links to the paper flower tutorials.  The tutorials for the other paper and felt flowers can be found here.